the olympians and muses

Home Exhibitions the olympians and muses 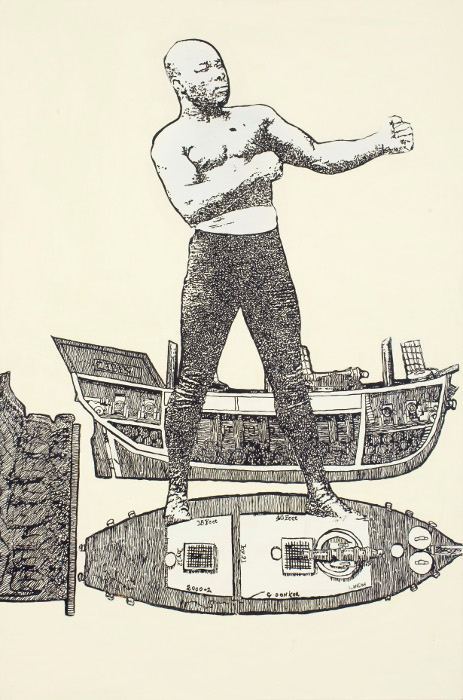 THE OLYMPIANS AND MUSES
Godfried Donkor

The series of boxers and the Madonnas form the basis of works in the exhibition ‘The Olympians and muses’, the first solo exhibition by Ghanaian-British artist Godfried Donkor. The featured boxers series are life size paintings of 18th and 19th century pugilists whose sporting exploits and lifestyle inspired the folklore and mythology of their time and profession. These were some of the earliest heroes to capture the public’s imagination. Sourced from archival illustrations and photos, the fighters are painted on a background of figures and text taken from the Financial Times newspaper. Donkor has always been fascinated by the sporting culture and mythology associated with this art form which can be found in all societies.

The Madonna series was inspired by the glamour and music culture during a residency in Trinidad and Tobago. Most of the models are local and are part of the ongoing religion of ‘carnival’.

Godfried Donkor’s collages fuse symbols of the eighteenth-century slave trade with images of contemporary Trinidadian glamour girls, set against a backdrop of pages from the Financial Times. Donkor, who was born in Ghana but now lives in London, juxtaposes these incongruous elements as a means of scrutinising themes of capitalism, globalisation and liberation. His luscious and alluring ‘black madonnas’ emerge, phoenix-like from below the decks of the lithographed slave ships, in a triumphantly brazen, carnival-like celebration of human endurance.

In partnership with Artlogic, Godfried Donkor’s exhibition will have a special opening on Saturday, 10 October at 13:00 as part of the Spring Art Tour.